"Dispatches from Pakistan" and Hoodbhoy on terrorism

First of all, hello to our regular monitors at the Department of Homeland Security. They have been forced to release the list of keywords they use to monitor social media. Ahmm. Yes, if you just mention Pakistan, I guess you will get some hits on your post (oh - the hits just went up :) ).

Second, if you are interested in checking out what is going on in Pakistan other than craziness, here is a good start: Dispatches from Pakistan:


A book that charts Pakistan’s aspirations and challenges.

Pakistanis are alive. Sold by governments who should save them, killed by secret agencies who should guard them, bombed by American drones, ‘structurally adjusted’ into starvation, beaten, rendered, tortured and disappeared, and yet, inscrutably, immutably, even joyously, they are still alive.

DISPATCHES FROM PAKISTAN is an introduction to that liveliness, with sixteen original essays that take us from Balochistan to Baltistan, and poetry from Jalib and Riyaz. This collection is essential reading for anyone who is invested in the social history of transformation underway in Pakistan.

It looks fantastic and serves as an antidote to much of the news coming out of Pakistan. It is edited by Madiha R. Tahir, Qalandar Bux Memon, and our friend Vijay Prashad.

But darker news from Pakistan is also hard to ignore. Here is a short talk (about 17 minutes) by Pervez Hoodbhoy on the current situation in Pakistan. The talk was recorded in March of 2012 and there is another political crisis engulfing Pakistan right now (in case, you are interested in learning about the current circus in Islamabad, here is Ayesha Siddiqa's article: Qadri leads a long march to nonsense). There have also been more attacks on Shias in the last couple of months, and the last carnage has led to protest by the public (also see this piece by Kamila Shamsie: No Solidarity in Pakistan).

Also see this earlier post: Is Pakistan spiraling down the path of Iraq?

Two more things related to art and the issue of terrorism in Pakistan: Here is an illustration of a Pakistani flag by musician Usman Riaz that got a lot of attention after the Shia massacre in Quetta: 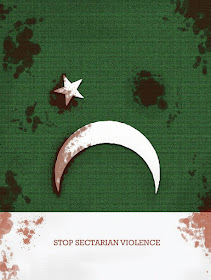 And I wanted to again post this fantastic Urdu cover of Zombie by Bakht Arif: